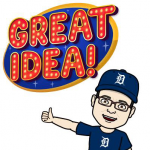 Big Al was known for his unique, offbeat interviews with celebrities, sports figures and politicians. During a 2006 Super Bowl Press conference in Detroit with Mick Jagger and the Rolling Stones, Big Al proclaimed to Mick that “I have a hunch you may be my father.” To which Jagger replied, “I do see a great similarity in resemblance.”  The “encounter” made international news.

Today Al wears many creative hats, including actor, voice-over talent, dinner speaker, and emcee. He has also been a guest host on the Mitch Albom Show on WJR AM 760 Radio in Detroit.

Al is especially excited to join the fortysix/5 team as a Creative Consultant. “fortysix/5 brings a unique blend of business, marketing and creative hands-on savvy to every project.  As a longtime sufferer of Adult Attention Deficit Disorder, it’s a real pleasure to work with such an effective, organized and efficient organization! They let me do my creative ‘thing’ and then elegantly reign it all in for the best possible outcome for their clients.”